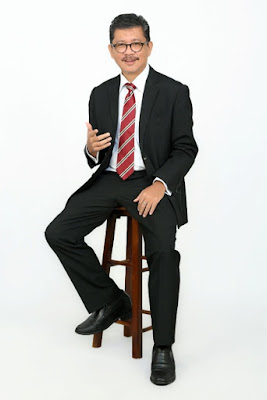 Azmi Shahrin was born in Ipoh and received his early education at St. Michael’s Institution, Ipoh and Malay College Kuala Kangsar. He won a Shell Scholarship to further his studies at the University of Kent, United Kingdom where he graduated with a Bachelor’s degree in Accounting and Economics. He subsequently obtained a Master’s degree in Economics from the University of Malaya (2009) and he is currently a PhD candidate at the same university. He has been a member of MENSA since 1989. He has had more than a decade’s working experience in managing marketing communications, distribution channels and product branding with several companies including Shell Malaysia Trading S/B and Maxis Communications Bhd. However, destiny was calling and in 2003, he quit his well paid job to become a trainer.

Azmi owes the turning point of his life to Toastmasters. In 1998, he joined Extol Toastmasters Club to sharpen his presentation and communication skills. He was President of the club in 2005-2006. He was also instrumental in the founding of Kelab Pidato Perdana (a Malay language Public Speaking club) where he served as President in 2004-2005 and is currently the Chief Trainer. In 2007-2008, He was Governor of Division W (of District 51 of Toastmasters International) and had the responsibility to oversee 32 clubs. He has also won many prizes in speech contests over the years and awards for excellent leadership and dedicated service, such as the Division C Toastmaster of the Year 2004-2005 award. He is also a trainer with the Toastmasters Leadership Institute. In 2006, he achieved Toastmasters’ highest award, which carries the title of Distinguished Toastmaster (DTM). All these enabled him to launch and excel at his new career as a Public Speaker and Presentation Skills trainer.

In 2015, Azmi has achieved the Gold Award Certificate for Test of English in Communication (TOEIC) scoring the maximum score of 495 for both the listening and reading components. This makes him a qualified trainer for TOEIC courses.

In the past 12 years as full-time trainer, Azmi has conducted training for the private/corporate sector, the government sector, educational establishments as well as members of the public. He has trained over 12,000 adults and students. While he specializes in public speaking and presentation skills, he is also competent in related areas such as communication skills, interpersonal skills, negotiation skills, English language skills and leadership skills.